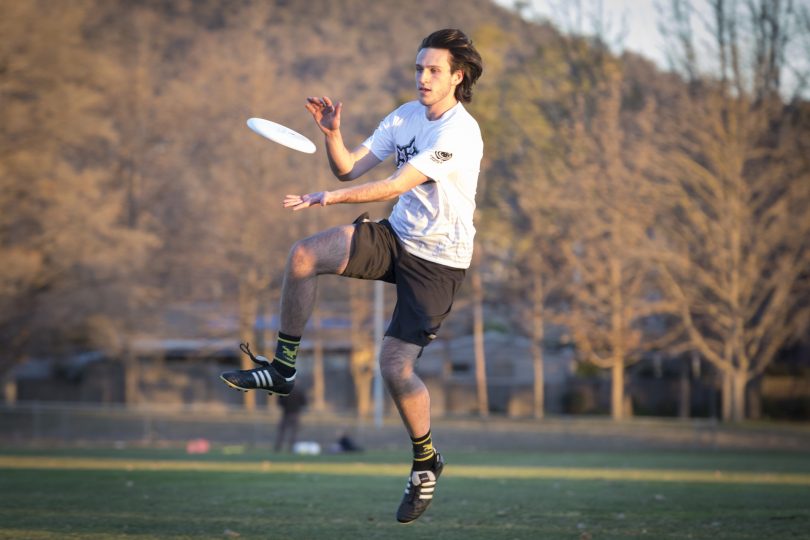 It’s a sport that prides itself on not needing referees – so you know they’re going to play by the COVID-19 rules.

And now sport is back on, Ultimate Frisbee will be one of the first to return to competition mode this Sunday when the first round of the Canberra Ultimate Premier League takes to the field.

As a designated non-contact sport, the discs (aka frisbees) are ready to fly for the sport’s second season of competition.

Ultimate Frisbee is a seven-a-side, non-contact, mixed-gender field sport played with a frisbee. During the summer season, around 1200 people play social Ultimate Frisbee each week in Canberra. Australia is routinely ranked in the top five nations internationally and the sport was officially recognised by the International Olympic Committee in 2015.

Canberra Ultimate president Jason de Rooy said the six Canberra teams are all eager to return to competition, having lost the 2020 national and international seasons due to the pandemic.

“The national season usually finishes on the Anzac Day long weekend, but sadly that didn’t go ahead,” Jason said. “Canberra actually hosted the last interstate event in mid-March and pretty much the next day everything shut down.

“Canberra also has about 20 players who were all set to play an international tournament in July, but that has been cancelled, too.

“All of that crew are absolutely hanging for our premier league to start.”

He said there are about 150 Canberra players who participate in the national competition, but for many, the sport is one that suits people who have played sports such as Australian rules, soccer or netball.

“A lot of our players find the sport through university and stick with it. We have players aged from 15 through to 55.

“It’s also great for people who have played other sports and can’t take the hits anymore but still want to run around. I used to be a fairly serious soccer player, but got injured and aged out. Then I found this.

“We get netballers, too, who are sick of hearing whistles all the time,” Jason said.

Without the need for referees, players participate in what Jason calls the “spirit of the game” principle.

“It sounds crazy when you come from other sports, but it works in that the rules and the decisions are made by the players,” he said.

“Even at the World Games (for sports that aren’t included in the Olympics), there are no referees.” Ultimate Frisbee players in action ahead of their return to competition this weekend.

In all Canberra Ultimate leagues, each team is rated on its ‘spirit of the game’. This is done by rating the other team for the players’ knowledge or use of the rules, fouls and body contact, fair-mindedness, positive attitude and self-control.

The sport is also inclusive in that it supports mixed teams and Jason said they welcome new players who want to get involved in the social competitions.

The marginally more competitive format has seen players from all six clubs return to training for the Canberra Premier League.

“All six clubs were able to return to training a few weeks ago and are champing at the bit to commence the competition,” Jason said. “Everyone is really engaging with the need to manage risks around coronavirus transmission, and I am pleased and excited that we’re getting going again.”

Reigning premiers, the Inner North Radicals, will be looking to continue its domination of the inaugural season last year. Radicals chair Mikey Hatfield said, “The Inner North has long been the centre of gravity for ultimate in Canberra, with two decades of play at Dickson and more recently Lyneham. We’re keen to keep capitalising on that”. Last year’s runner-ups from ANU are traditionally strong, and along with the Tuggeranong Titans, will shape as the Radicals’ major threats early in the season.

“Both outfits were arguably only a few errors away from taking the title in 2019,” Jason said. “The ANU features a very deep squad providing multiple selection options, while the Titans benefit from a number of sibling connections, essential to their quick passing game.”

The Southside Vortex, Gungahlin Glory and UC/Belconnen Blizzard will each be looking to improve on their previous outings, with the Blizzard, in particular, recruiting hard in the off-season.

For those still unsure, here’s Ultimate Frisbee in action. And to get involved, visit Canberra Ultimate.