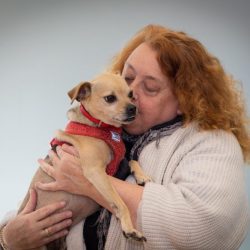 Long time Canberra journalist Sally Hopman will be familiar to readers from her years at The Canberra Times, where she wrote extensively about Canberra and the Capital Region before joining the National Library.

She began her career as a cadet journalist in Nowra and claims to have worked on some of the best and worst newspapers in the country - and learned rather a lot in the process.

When not writing, Sally collects snowdomes, take photographs of trees (mostly the same one), lives and breathes life on a Yass Valley sheep farm, volunteers at Vinnies and rounds up Beswick china animals and real rescue dogs – not necessarily in that order.

The adjacent street names are a dead giveaway: Bettong, Echidna and Quokka. You may be in the middle of one of Canberra's newest suburbs, Throsby, but you're also next door to the soon-to-be completed $5 million Wildbark learning centre, which boasts one of the best backyards in the world - the Mulligans Flat sanctuary. Five years in the making, Wildbark will...
Read More

If you go down to the woods today you're sure of a big surprise - especially if you eat something you shouldn't. Our bush is full of marvels but there are just as many dangers lurking about, so it's best to listen to the experts: if you don't know what it is, be it animal, vegetable or fungi, leave it...
Read More

Academic on track for snakes and humans to live together, safely

Gavin Smith spends his days tracking down something that most of us are keen to stay away from - Eastern brown snakes. An Associate Professor of Social Science at the Australian National University, Gavin also owns and operates ACT Snake Removals. Since 2021, he has been watching, finding and tracking the Eastern browns in a number of Canberra nature park...
Read More

Wondering why there’s a spike in interest in echidnas? Let’s get straight to the point

So why is November the echidna's favourite month of the year? The answer to this, and other pointed questions, will be answered here, today, in what we like to call - Everything You Always Wanted to Know About Echidnas (But Were Afraid to Ask). We've enlisted the help of echidna expert, Mulligans Flat sanctuary volunteer, photographer - and civil engineer...
Read More

Once you walk through the predator-proof fence, it's like going back a century in time. Sure, you can hear the faint hum of cars – after all, you're only metres from one of Canberra's most populated areas, Gungahlin – yet you could be in another world. Mulligans Flat Woodlands Sanctuary, at Forde, has just restarted its Twilight Tours following the COVID-19...
Read More

They're known as the 'Humans of Mulligans Flat', and like their very distant cousins in New York, the vast protected land mass on the edge of Canberra's new suburbs is providing sanctuary in the toughest of times. During Canberra's first COVID-19 lockdown, in 2020, rangers at Mulligans Flat Woodland Sanctuary, a 1200-hectare site in Canberra's northeast, noticed an increase in...
Read More

When it comes to dogs, you humans are barking up the wrong tree

There's a lot of barking going about on how to train dogs. Make them sit when they'd rather run. Not leave smelly things underfoot. Stop greeting each other in that very doggy way. But on this, International Dog Day 2021, we've asked some of the best dogs we know - who may well be training Region Media staff and sleeping...
Read More

How to bring out the best in your cat, dog … or hippo

Ever wondered how to explain to your dog - or his mates at the dog park - that a bucket on his head is not a "cone of shame"? Or convince a scared horse that going into a trailer will save her legs. Or even a chicken that knowing how to get into a crate may save its life? Animal behavioural...
Read More

Mark "Chopper" Read and Vincent van Gogh have more in common than trouble wearing glasses. It turns out the colourful Chopper Read is more colourful than we might have thought. More than 40 pieces of his artwork are going on show - and sale - at Gold Creek's Aarwun Gallery from this Saturday (24 July) in what looks not unlike the...
Read More